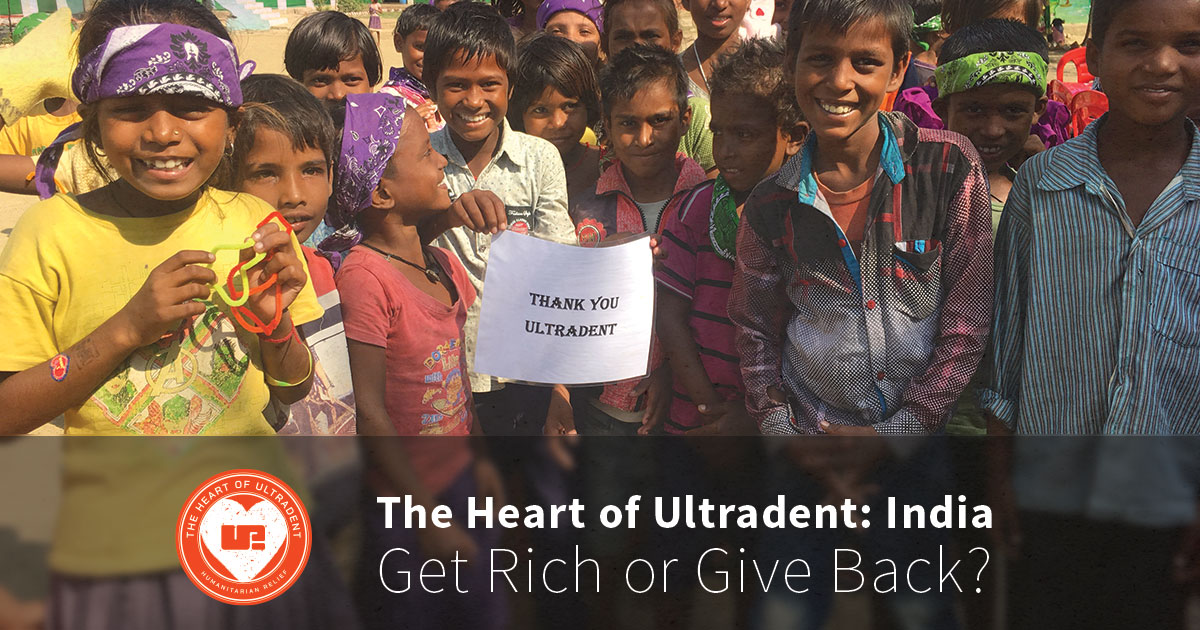 INDIA: How One Dentist Set Up a Clinic for Orphans

Dr. Bill Jordan of Tualatin, Oregon, isn’t your typical dentist. In fact, when a friend of his retired from dentistry and, instead of selling his practice, sent all of his patients to Dr. Jordan’s practice, Dr. Jordan didn’t see it as a chance to amass more wealth.
“When we got this huge influx of patients from my dear friend who retired, we saw it as a huge blessing and my wife and I thought, ‘There’s a reason God gave us this and it wasn’t so we could have more money. It was so we could help more people,’” reflected Dr. Jordan. “We always felt it wasn’t our money—but something God put in our hands so we could help others, so that’s what we’ve been doing.”
Upon hearing about a year and a half ago that an organization called Open Arms India had contacted his church in need of a dentist that could set up a clinic in their orphanage, The Good News Campus of Open Arms in the Bihar Province of Northern India, Dr. Jordan felt this was what he should and could do to give back. “We decided to put that revenue into purchasing the needed portable dental chairs and equipment ourselves so we could give back, and we’re going to continue donating the rest to charities and organizations in need.” 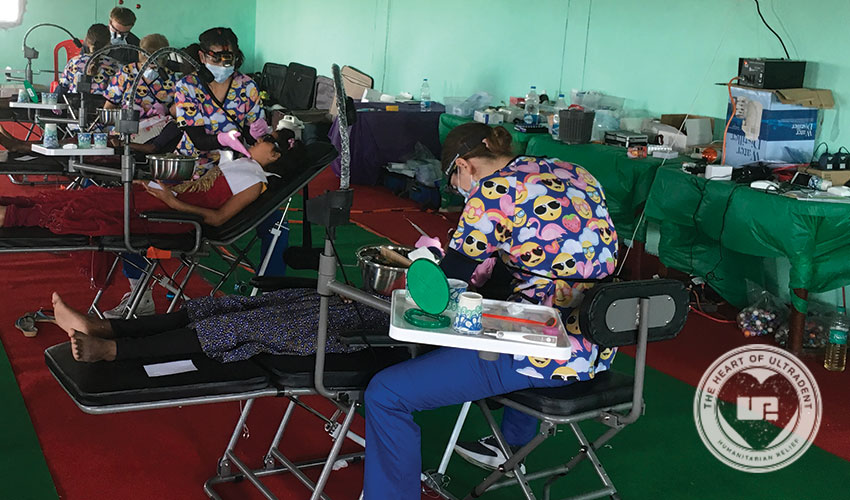 The dental clinic chairs and equipment which
Dr. Jordan funded will remain at the
orphanage year-round so the kids in
residence can get continuous care.

In addition to the equipment Dr. Jordan purchased for the orphanage, he received product donations from Ultradent and other dental supply companies, and after much planning and preparation, they set out on a two-week humanitarian trip to India just last month, returning Monday, November 5th. 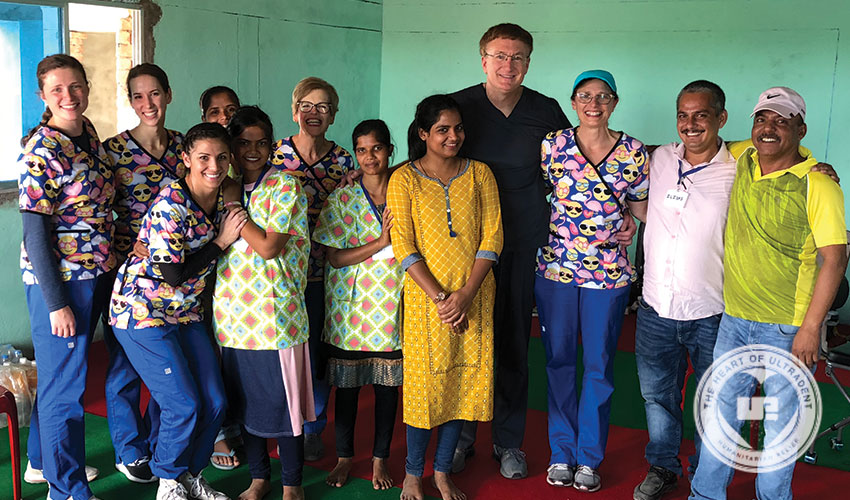 Dr. Jordan and his dental team, which
included his wife, daughter, two hygienists,
a dental assistant, along with several
other volunteers from Open Arms.

Along with his wife and daughter, Dr. Jordan brought a team of two dental hygienists and one dental assistant to help in the clinic for the duration of their trip. Of the 500 children at the orphanage, they were able to see and treat 304 of them.
“We prioritized the kids who were experiencing dental pain first, and from there, we saw them by their school class groups. While the kids experiencing pain came to my chair first, the other kids went to the hygiene chairs to get prophies, fluoride varnish treatments, and in some cases, sealants. “It was crazy to see some of the kids who were in pain come in with a grim look on their countenance, and then to see their whole face break out into a smile the second I numbed them. That was so rewarding! They were all just so kind and loving and so grateful,” said Dr. Jordan, adding, “I learned a lot about joy and submission from these kids. I’m a 6’5 tall man and there I was with my loupes on, probably looking very foreign and strange to them, and yet they were just so trusting and sweet.” 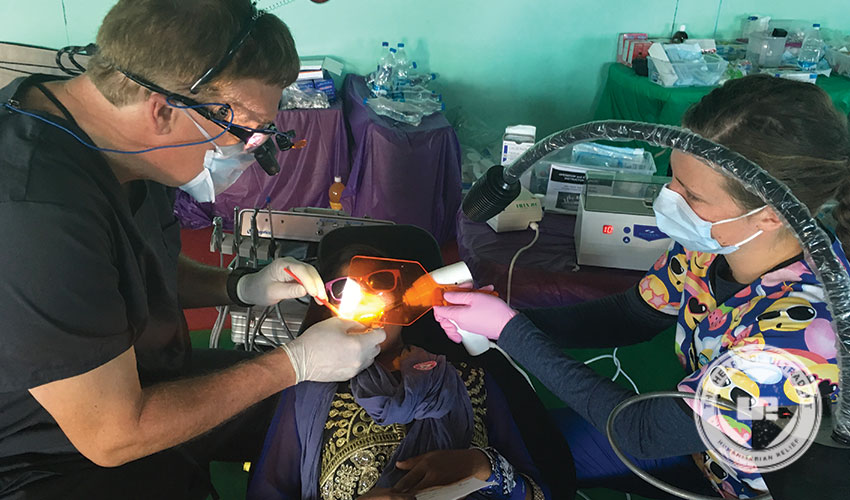 Despite his loupes and having
never received dental work,
the kids were trusting and appreciative.

When asked how this trip differed from Dr. Jordan’s many humanitarian trips he’s taken in the past to various parts of South America, he said,
“Although the children had quite a bit of calculus because most of them have never had their teeth professionally cleaned, I was surprised to see fewer cavities and decay with the children in India compared to other places. I think it’s because their diets involve more savory spices and starches versus sugar. It was also very cute to see them react to the mint prophy paste. I don’t think that’s a flavor they encounter often in India.” 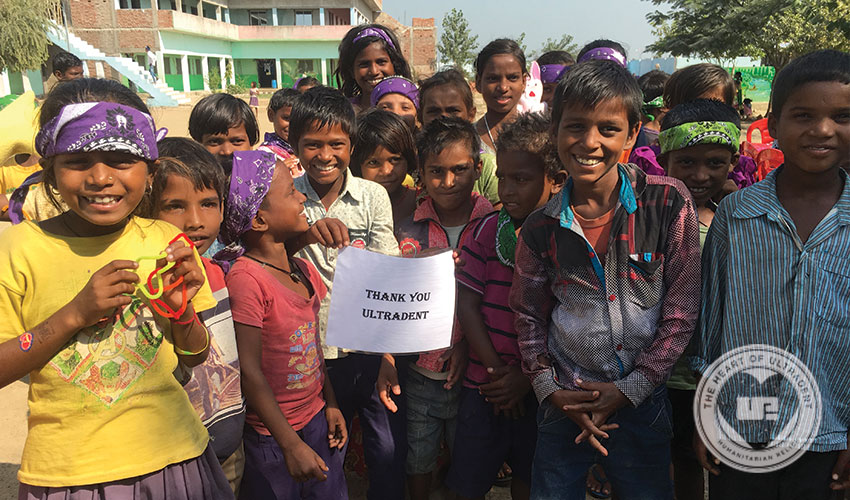 Kids at the orphanage show off their
clean smiles and hold a sign thanking
Ultradent for their support.

Open Arms India requested that Dr. Jordan return, if possible, every one to two years so the children can receive continuous dental care, and he’s already looking forward to his next trip.
“It’s so nice that the next time I go, the chairs and equipment will be there waiting for me. That’s another difference from the other humanitarian missions I’ve participated in—I never got to set up a clinic where I’ll see the people I treated more than once in the coming years. That’s such a treat.” 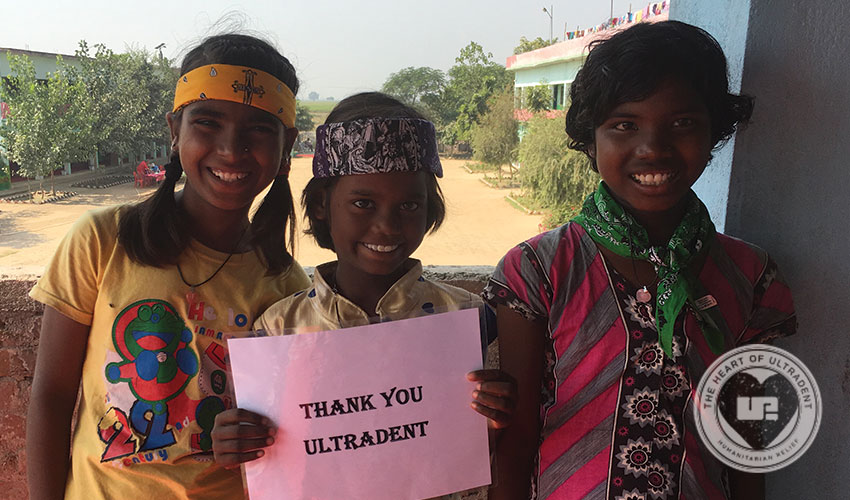 Smiling, happy kids after their cleanings
and checkups with Dr. Bill Jordan
and his team thanking Ultradent for their support.

However, Dr. Jordan is hesitant to accept praise for his efforts. “I want to give all the glory to God. I get 20 times the amount back what I give to those kids. It’s just incredible and a privilege for me to treat them, not the other way around. I just hope we’re able to make a significant difference in their lives, and longevity of their oral health, and get the ones who were hurting out of pain.”

Another sweet story Dr. Jordan relayed from his mission, “The kids long to communicate with you, so they mimic you a lot and it’s the cutest thing,” he said.
“I’d say ‘You’re doing great, honey!’, and the little girl would look up at me and say, ‘You’re doing great honey!’ It was just adorable. Or another time, I put my hand on one of my little patients’ faces to reassure her and she reached up and put her hand on my cheek too. It was so touching.” 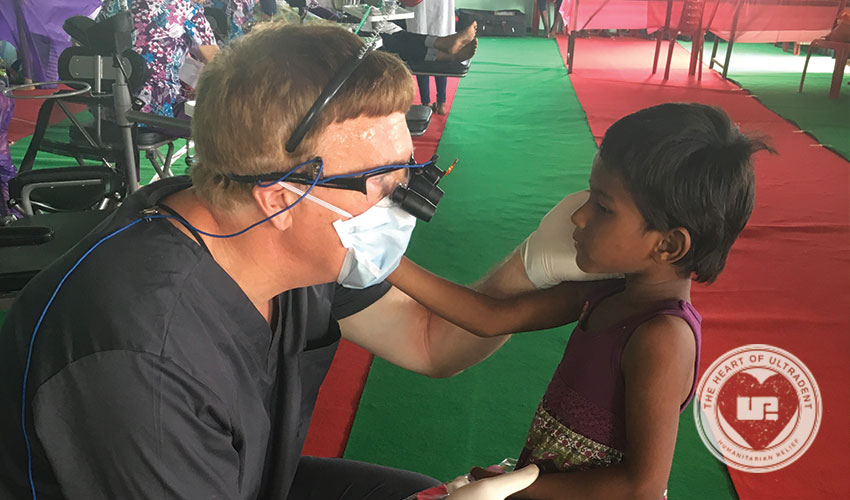 Cameras capture the moving moment
when Dr. Jordan touched a young
patient’s face to reassure her,
and she in turn, did the same.

For dentists looking to embark on a humanitarian trip, Dr. Bill Jordan can’t say enough about what a beautiful and rewarding experience he had.
“If they go, they’ll soon become hooked, just like I did. It’s incredible. I can’t wait to go back!”