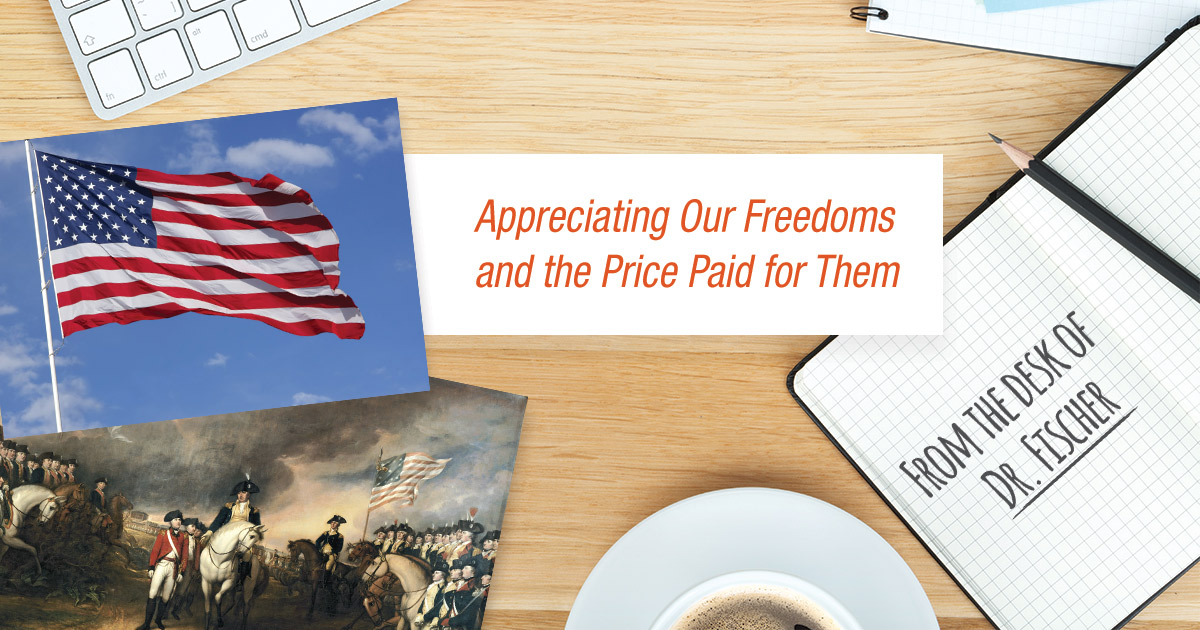 From the Desk of Dr. Fischer: Appreciating Our Freedoms & the Price Paid for Them

​The Fourth of July has always been a major holiday for me and for my family. We have some fond memories and stories surrounding it. We usually get together and barbeque, and over the years we’ve even done little parades with all the grandkids. They dress up in patriotic costumes and we use the tractor to drive them around our center island while the adults clap and wave. It makes the kids feel particularly special.

​
American children march in
a traditional 4th of July parade

However, it’s amazing how some of these great, happy times that we celebrate as a country are holidays that were born of war. July 4, 1776, marked America’s declaration of independence from Britain. In the war that was fought over that endeavor, a great number of people from both sides paid the ultimate price. However, I think it’s important to note that, today, the United Kingdom and the United States are probably the closest allies on the planet, despite our extreme differences that led us to fight one another over the United States’ independence more than 200 years ago.

​ America’s Declaration of Independence
​from Great Britain
It’s appropriate on national holidays such as the Fourth of July, Veterans Day, and Memorial Day to remember those who paid a price—not only those who paid the ultimate price, but also those who went on to bear the scars of war for the rest of their lives.

​ Painting titled “Surrender of Cornwallis,”
by John Trumbull, depicting the Siege of
Yorktown, the final major battle
of the Revolutionary War where British troops
surrender to American forces, effectively
ending the war and guaranteeing independence
to the United States of America

The United States is the oldest continuous democracy in the world. We’re going through tumultuous times right now, with strong differences of opinion in our congress and our government and our people. Now, more than ever, I think it’s very important to remind ourselves of the array of things we have in common rather than drive the stakes deeper on the ways we think we’re so different.
Just as I believe we can be kinder to one another, I believe our country must show that we can be good allies to those who have been loyal to us for decades and even centuries.
​

All in all, with our barbeques and parades tomorrow, I feel grateful that we live in the country we do.
Here, we have the freedom to disagree without fear of legal repercussion-- making lively, spirited discussion, and ultimately, progress, possible. That is unique and I often remind myself to never take it for granted. Happy Independence Day! Where would we be without our freedoms?
Hugs,

Read more: ​See the complete From the D​esk of Dr. Fischer Series!​​​