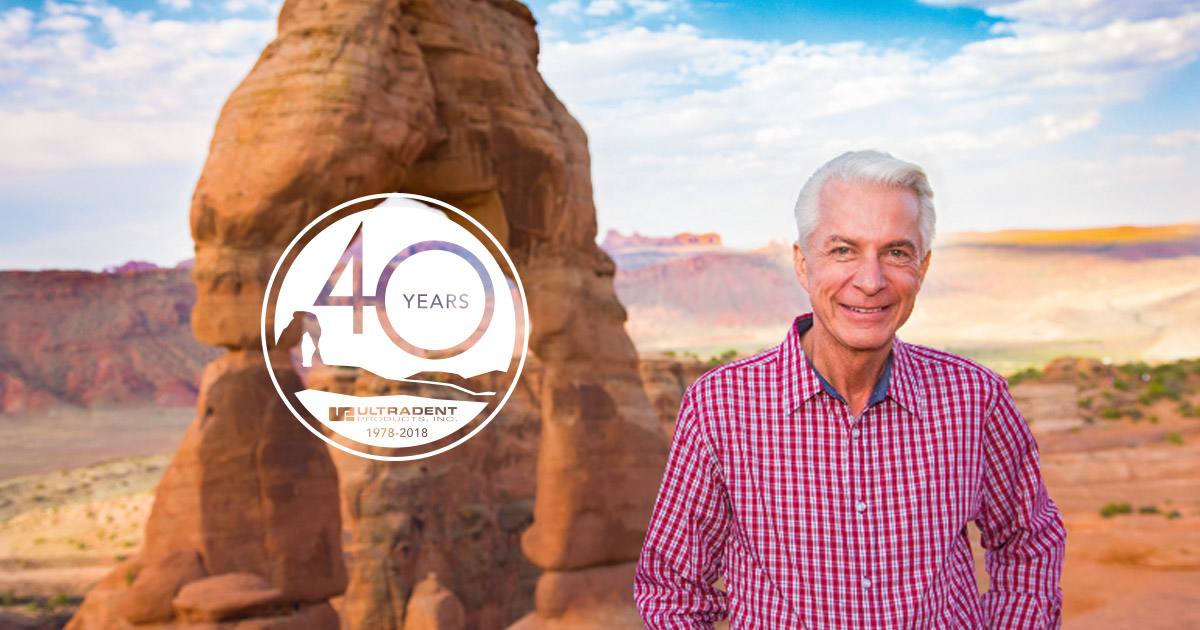 Ultradent Then and Now: Dr. Fischer Looks Back on 40 Years of Sacrifice and Triumph!

How does it feel to be celebrating Ultradent’s 40th Anniversary?

It seems scary! Where did those years go? How did we get to 40 years already? It seems like we started just 20 years ago at the most and yet, here we are! It is amazing. Time really can fly by. 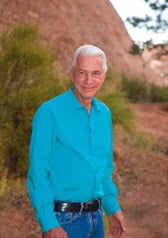 But at the same time, over those 40 years, so much has grown, developed, and changed to make Ultradent what is it today.

It’s true. A lot of great people went in to making Ultradent happen and I’m thankful that they joined me in this wonderful endeavor. 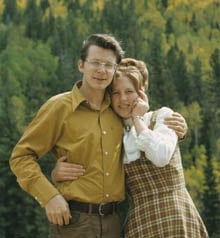 What’s beautiful is that all of the early stories about Ultradent and getting this company off the ground involve family. When we discovered that we couldn’t afford a lot of the expensive advertisements in the dental journals and publications for our first product, Astringedent® hemostatic, we realized that getting it out there and in the hands of clinicians via sampling would have to be a family effort. 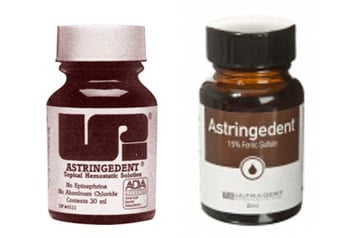 Did that experience forge a greater bond between you as a family, because of the teamwork that was involved?

I think it was healthy for us, although I’m speaking for the group. But I truly believe that working together brings you together! 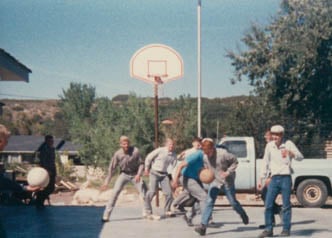 When I say the words, “blue recipe box,” does that ring a bell for you, Dr. Fischer? If so, tell me what comes to mind.

Oh yes. Oh yes. In the beginning days of Ultradent, we had a little blue recipe box that we used blank recipe cards to fill out names of customers, their contact information, street address, and the like. It grew from housing a quarter of an inch of recipe cards, to a half an inch of recipe cards of doctors’ information, to being full of customer information. It’s almost charming that that is what we used then, and that from that little blue recipe box, Ultradent has grown and graduated to housing our customer information in computer databases full of our thousands of customer “recipe cards” from around the world! What a difference 40 years makes. That is a prime example! It really puts it into perspective. 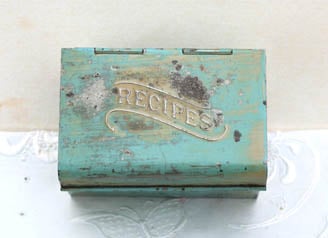 In the beginning days of Ultradent, the company kept customer information in an old blue recipe box


But, I have to say, we didn’t graduate from the little blue recipe box straight to advanced computer databases. The next step was getting an early computer with an 8-inch floppy drive from Ohio Scientific. It was like a glorified typewriter! We also had some tractor-feed forms that we would use for our packing slips and invoices and they had maybe five or six different copies. We truly had the best tractor feed printer you could get at the time but we had so many layers in that invoicing and packing slip info that when we printed everything at the end of the day, someone would have to stand there and pull on the slips to keep the printer moving. It took a lot of time with someone bent over that printer to get everything printed and taken care of. It was a real physical way of seeing how the company was growing—from the little blue recipe box filling up, to the time one had to spend standing over the printer pulling the invoices and packing slips through while they printed at the end of the day!

I also remember, because we mailed everything out ourselves, seeing each and every customer and practice name—and I think of some of those very first customers to this day. I remember Leenie being tickled over two doctors who were in a partnership practice with the last names “Mullen” and “Pullen.” I’ve never forgotten them! We also had a “Dr. Payne,” which we got a kick out of at the time, and that I’ve smiled about all my life.

Ultradent is now a world-renowned dental company, with customers and offices all over the world. When did Ultradent begin to expand internationally? How did that happen?

Our first international customer was Yoshita, a distributor that purchased our products and then sold them in Japan. That was around 1981 or 1982. They had ordered the biggest order of Astringedent hemostatic and the Metal Dento-Infusor® tips we’d ever received at the time. 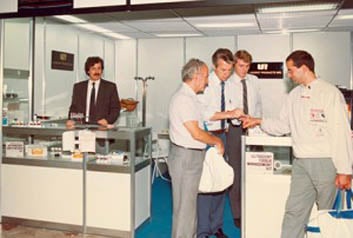 Dr. Fischer draws blood from his own arm at an international trade show to demonstrate the effectiveness of Astringedent hemostatic

Tell me about some of the people in the industry who you’ve been able to rub shoulders with or who have influenced or helped you in some way throughout this journey.

There are a number of prominent key opinion leaders in the dental industry whose influence have really made an impression on me. The first one that I think of is Dr. Gordon Christensen. He’s always had great ethics and values, and he has been one of the most respected lecturers, researchers, and evaluators Clinicians Report of dental products for as long as I’ve known him. He helped us get a seal of approval from the American Dental Association on our first product, Astringedent hemostatic, as well as approval from the FDA to manufacture and sell it. That really helped us get off the ground and going. He believed in the product and put his name on the line to support it and I’ll be forever grateful. 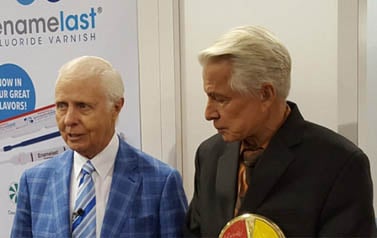 
There are also several other professors who made a great impression on me during my time in dental school at Loma Linda University. Dr. Jim Dunn, who is a very respected dentist and lecturer, and Dr. Lloyd Baum, an innovator in prosthodontics, both supported and championed me. In fact, Dr. Baum asked me to write a chapter in one of his books, “Restorative Techniques for Individual Teeth” about Astringedent hemostatic and the science behind it that allowed me to educate dentists about the benefits of using it. 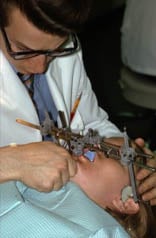 Dr. Fischer working on a patient as a dental student at Loma Linda University


Dr. Michael Miller, the respected evaluator and doctor behind Reality Esthetics, evaluated Astringedent hemostatic with high marks in those early days, and it helped us get the word out. There truly are so many doctors out there who played a role in Ultradent’s success—too many to name them all, but I am so grateful. 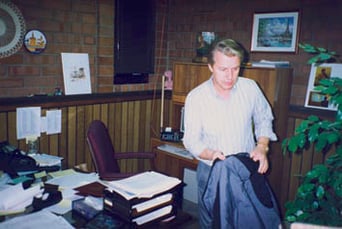 Dr. Fischer in his dental practice in the early 1980s

What are some of the key take-aways and lessons you’ve learned over the forty years since you started Ultradent that you could pass on to others?

First and foremost, if you’re wanting to start a business, and hoping for it to be successful long-term, the most important thing I’ve learned is that you have to make sacrifices—economical, personal, and everything in between. For example, when I received an opportunity to lecture on Astringedent hemostatic and the Metal Dento-Infusor tip in Europe, I was ecstatic, but I was still running my personal dental practice at the time. I knew if I went that I would have to shut down my practice for several days, and we needed that valuable income at the time. So, as much as I wanted to go, I forewent the opportunity and asked Dr. Roger Hicks, a colleague and friend of mine, to go in my place so I could continue to practice. 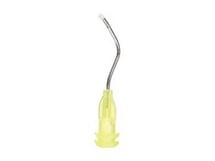 The Metal-Dento Infusor® tip is used to deliver Astringedent hemostatic


Other sacrifices were in living as frugally as we could in those first few years. In fact, I don’t know that we went out to eat at a restaurant after we started Ultradent in 1978 until the mid-80s!

One other huge lesson I’ve learned along the way is to put my ego aside. If you’re an egotistical leader, you push good people who want to help away. Humility attracts people to working with you in quality ways and allows you to learn from others rather than always relying on yourself. It’s so important to be able to recognize our own mistakes and fix them—there’s not a person in the world who doesn’t make mistakes. 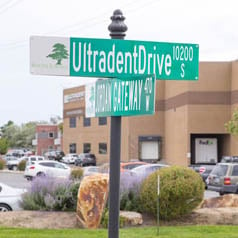 What accomplishment, when it comes to building and growing Ultradent over the last forty years, are you most proud of?

The thing that was the most difficult to do, which is the reason I most proud of it, is that we were able to grow Ultradent to what it is organically, maintaining its status as a private company and being able to stay in control of our company. We’ve also put in place a mechanism that makes it so Ultradent need not ever be sold, which was always my goal. I’m thrilled and grateful for that. We also have a wonderful succession plan in place for the company in the many years to come, and I’m also very proud of that. 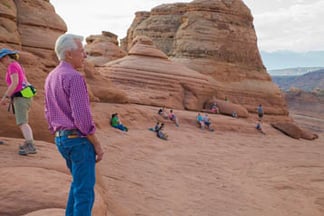 What do you look forward to for Ultradent in the next, say, forty years??

The main thing I look forward to is good health and the good health of the people around me. If you don’t have your health, what do you have? 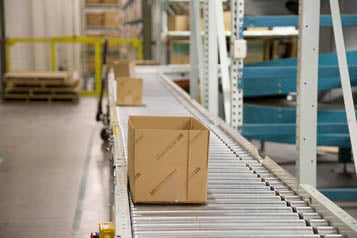 Ultradent has always shipped its own products, both domestically and abroad, from its headquarters in South Jordan, UT

Our first order from Yoshita was about a $65,000 order, which for us at the time was huge and marked a moment that really kicked up our business in a more serious way than before. At the time, that sum would have represented 33% of our business, relative to what we were making overall. In our U.S. business, we chose to grow organically and not sell our product through distributors, so our business grew at a much slower, but steady, pace. It took time.

65% of what we make, we sell internationally. More than half! I’m happy to say that thanks to our organic (non-distribution) sales model here in the U.S., we’ve built a robust business here in the U.S. that allows us to have personal, direct contact and relationships with our customers, which is very rewarding. 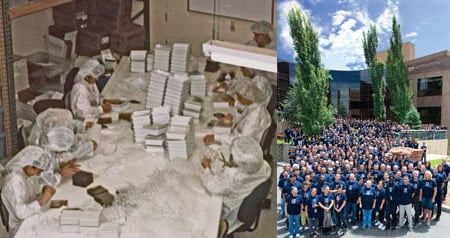 Ultradent’s number of employees has grown from family only in its early years to over 1,600 people worldwide

We didn’t have any employees that weren’t a Fischer family member until about 1982 or 1983. From the beginning until that point in the early 1980s where we began hiring people outside the family, the total was about five to eight people at any given time.

After working out of our home, the first building we moved to was a 2,400 square-foot metal haybarn that we converted into our business and manufacturing facility. It passed FDA inspection several times.

We have two buildings that comprise our headquarters in South Jordan, Utah. Each is approximately 230,000 square feet. So, that’s 460,000 square feet here in South Jordan. Keep in mind, that doesn’t count the many international offices and subsidiaries all over the world. What a difference forty years can make! 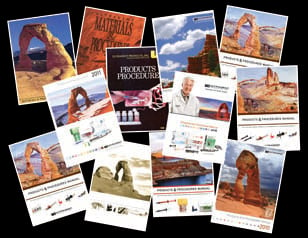 Ultradent’s catalog of products has grown from two simple products to over 1,400 offerings worldwide today

When we first started Ultradent, all we had was Astringedent hemostatic. Then, we introduced the Metal Dento-Infusor tip two years later and it stayed with us offering just those two products until 1983, when I started developing the Ultrapak® retraction cord.

We have 1,430 products that we offer worldwide.

2018 marks Ultradent’s 40th year in business. To celebrate, we will be featuring 40 Years of Stories. Check back every month for a new Ultradent Story!