Ultrapak: How the Best Retraction Cord on the Market Has Only Gotten Better

In the early years of my career, the advent of braided retraction cords were a big improvement over the twisted cords of the past, although despite the improvement, I often found that these “new and improved” cords could still be too rigid. This, due to the fact that 99% of the component of the fiber in braided cords runs close to parallel to the long access of the cord—making it so that pushing down on one end of the cord caused the length of the cord behind that area to rise.

Upon encountering this problem over and over, I knew there had to be a better way. That’s when I began to study the concept of a knitted, not braided, cord. The more I researched, the more a knitted cord made perfect sense to me because a knit is more like a chain, or a series of interlocking loops. This unique pattern allows the knit to flex and bend, and of course, when pressed down in one section, it doesn’t cause the rest of the chain to rise. This comes especially in handy when it comes to pressing the cord into the sulcus, as the knitted make up of the cord allows it to conform to the sulcus’ shape. 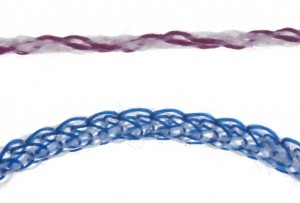 Some might argue that a knit, because it is less dense, is too loose and airy for such a procedure—a challenge that is easily solved by using a selecting a larger cord that compresses tightly when pressed into the sulcus. Additionally, a side benefit to the less dense structure of a knit when compared to a twisted or braided cord, is that the loops in the knit tend to bite gently into the tissues when pressed against them, which keeps in place nicely when using a high-speed bur—preventing it from entangling with the instrument which would cause it to come whipping out.

I’m often asked about how we got the knit of the cord to be so small. The answer is that it was simply a process of continuous improvement, as we like to say here at Ultradent. When looking to create such a tiny knit, we discovered that using the same needles used for knitting pantyhose did the job! I’m proud to say that Ultradent was the first dental company to create, use, and sell a knitted packing cord; and, thanks to its patent, it remained the only one to offer such a cord for many years!

However, despite no longer holding the position as the only dental company to offer a knitted cord, Ultradent continues to lead the way. We still offer the tiniest knit available on the market, and, when examined, the Ultrapak cord’s knit shape is consistent, open, and cylindrical. Also, we’ve continued to offer smaller and smaller sizes. The first editions of the Ultrapak cord came in sizes 0–3, and are now offered in as small as a size 000, thanks to the dedicated work of so many professionals on our Ultradent team who are committed to the concept of “continuous improvement.”