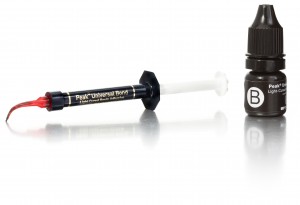 “I could talk for a very long time about what makes Peak Universal Bond the best bonding agent on the market,” says Dr. Fischer, founder, president and CEO of Ultradent Products, Inc. Although the statement may at first come off overly self-assured, it is in fact, quite the opposite. Peak Universal Bond comes from an arduous, more than two-decade quest of trial and error after trial and error.

Dr. Fischer recalls, “We always had the commitment to keep driving until we had the highest strength bonding agent, because for our minimally invasive techniques, for reaching our vision of bringing more affordable dentistry to a larger cross section of humanity, there needed to be the capability of more affordable, direct-placed dentistry. For that to occur, a high strength adhesive would be paramount.”

Therefore, to develop Peak Universal Bond, Dr. Fischer says they first had to develop an exceptional testing procedure and device, which in addition to the product itself, evolved over a 10-12 year period. This device, now referred to as the “Notched-Edge Testing Method,” became the ISO world standard for bond strength testing in 2013.
Dr. Fischer says that the development of the Notched-Edge Testing Method played a key role in Peak Universal Bond’s journey to the becoming the strongest adhesive on the market today.

“If you don’t know where you’re going, you’ll end up somewhere else! Measuring the results of what our chemists did from day to day, and knowing whether their work benefitted or hindered the bond strength of the product required predictable and reliable testing that could occur in volumes, then quickly generate data so to give guidance to the chemists for where to go next to improve the product.” Dr. Fischer adds, “Peak Universal Bond is an exceptional bonding agent and I cannot think of any time, for the definitive restoration, that a clinician would want the bonding agent to be any weaker than the ultimate strength it could possibly be.”

He concludes, “Before releasing Peak Universal Bond, we had about three generations of bonding agents prior to it, and we brought the strengths and learned from the weakness of each to take each new product to the next level each time. I’d say it’s been about 22 years total time that we’ve been developing and perfecting Peak Universal Bond.”