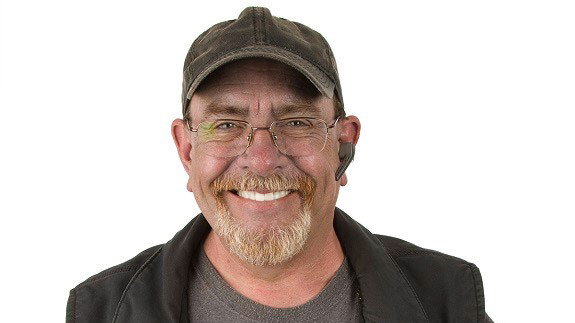 In the Driver's Seat with John Hofeling

“I have the best job in the company—nobody knows that,” says John Hofeling, Ultradent’s driver. “I wouldn’t trade it with anyone!”

He continues, “Every day, for the most part, is different for me. I usually start the day by picking up all of Ultradent’s mail and bringing it back so it can be distributed throughout the campus, but from then on, it’s anyone’s guess.”

John’s job involves picking up and delivering parts, (mostly VALO®), a route he affectionately calls “the grand loop,” and taking Dr. Fischer and other guests to and from the airport. On a typical day, he drives anywhere from 60–120 miles! He’s also driven to places like Corvallis, Oregon; California, and Texas, on Ultradent’s errand. But it’s not the driving that makes John’s job so fun. “Truly, my job as a driver has allowed me to form a lot of great relationships with some of the most interesting and intelligent people in the world as they travel to and from Ultradent for various reasons. It’s given me opportunities I would never have had otherwise to meet people, go places, and see things that are just amazing.”

Some of the life-long friendships John credits to his job with the company include Dr. Renato Leonardo, a renowned dentist from Brazil that often lectures at Ultradent’s Summits and seminars. “I’ve also gotten close to Dr. Carlos Ramos (another doctor from Brazil). He jokingly calls me his ‘first American,’ since I’m the one who met him at the airport the first time he came from Brazil,” he laughs.

Another friendship he cherishes, thanks to his job, is his relationship with Dr. Fischer. “As Dr. Fischer’s unofficial driver, I pick him up and take him to the airport for most of his travels, and he travels a lot this time of year. Because of that, I’ve gotten to spend a lot of time with him and as a result, have had a special opportunity to really get to know him throughout the years,” he says. “He’s probably the single kindest individual I’ve ever met. We love to reminisce about the past and the bygone days of coming up in the era that we grew up in. We’re a few years apart in age but we have a lot in common that way.”

As Ultradent’s driver, he often gets to be the “eyes and ears” of the visitors that come visit the company’s headquarters. He says, “I’m asked all the time when I’m transporting people, ‘Is it all just ‘put-on’ or is everyone here really that nice?!’ I tell them, ‘Nope, it’s the real deal. I mean, we’re not perfect but everyone here is pretty decent!’ They just can’t believe it!”

Furthermore, he adds, “Without exception, every time we have an Ultradent Summit, I get told how great this place is and how neat the people who work here are and how impressive the facilities and manufacturing are. People are just incredulous. They can’t believe it. It’s really neat.”

Most of all, John says he loves the sense of family here—which is the main reason that when he came to work for Ultradent 11 years ago, he never left, and for that, we’re lucky.