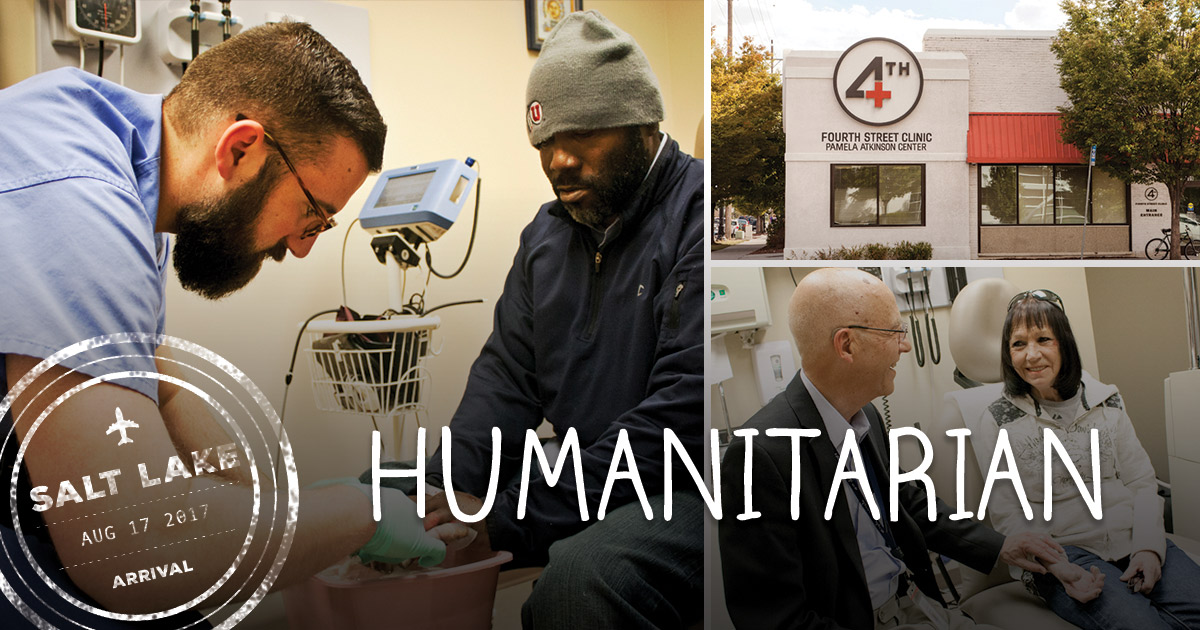 Helping the Homeless to Smile Again At the Fourth Street Clinic

Utah is world-renowned for its breathtaking beauty, and that includes the pristine streets of Salt Lake City. But venture into certain parts of town and it’s clear that every rose has its thorn, and for Salt Lake, that thorn has been finding the best way to assist the homeless. It’s been a growing conundrum in certain parts of town for a number of years, angering citizens and sending politicians scrambling for solutions. However, amidst the despair, chaos, and hopelessness, there’s a place that stands as a beacon of help; a place that offers the promise of a better future to the hundreds of people living on the streets. That place is the Fourth Street Clinic.

That’s where Dr. Ronald Kehl came in. Having worked in both private practice and public health, Dr. Kehl took on the challenge of opening the Fourth Street Clinic Dental Center, where he now sees over 1,300 patients every year. But, as previously mentioned, these aren’t your typical patients. Most of them are homeless and 100% of them live below the poverty line. 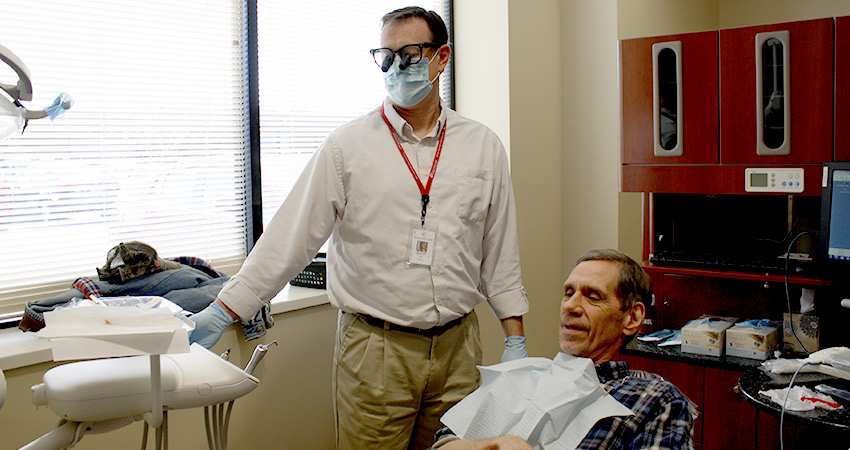 Dr. Ron Kehl prepares to work on a patient at the
Fourth Street Clinic Dental Center.

But the dental center’s mission goes far beyond placing “band-aids” on their patients and seeing them on their way. Dr. Kehl says, “We’re not just a medical and dental clinic. We have case managers that help people obtain housing, mental health services, and we have drug addiction support groups. We even have specialty doctors onsite like gynecologists to make sure women are getting the care they need. That’s the thing about the Fourth Street Clinic. We kind of work as a team to try and move our patients out of the situation they’re in. We’re trying to help them progress and we’ve had some great success stories in that process.” 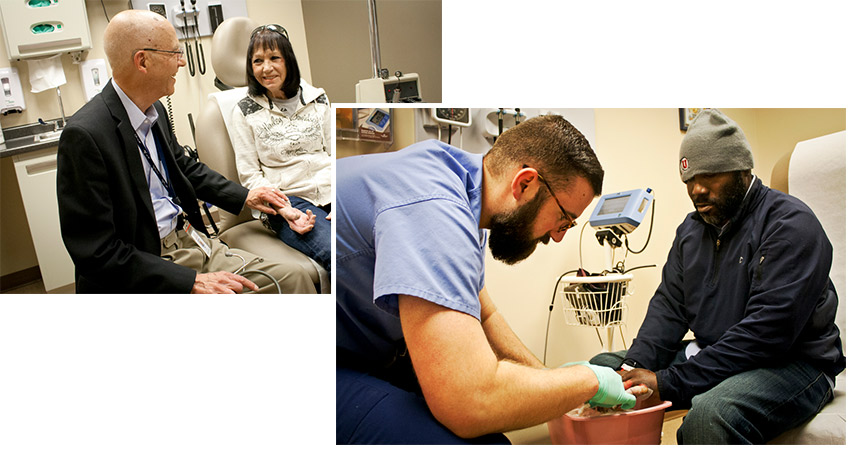 Left: Dr. Hal Cole, left, a volunteer
gastroenterologist at the Fourth Street Clinic,
checks the pulse of a patient with a smile.
Right: Cameron, a medical assistant at the
Fourth Street Clinic, treats frostbite on James.
Photo courtesy James Jarrard

Take Kim, for example. After taking care of her sick and bedridden parents for years, she chronically chewed ice chips to keep her mind off the stress, wearing her teeth down to nubs. After her mother had a stroke, Kim moved in with her parents full-time, and when her father defaulted on the mortgage then shortly after passed away, Kim found herself homeless and on the streets. Furthermore, her broken teeth kept her from getting a respectable, decent paying job and she lacked the insurance to get the dental care to fix them. That’s when Kim turned to the Fourth Street Clinic. 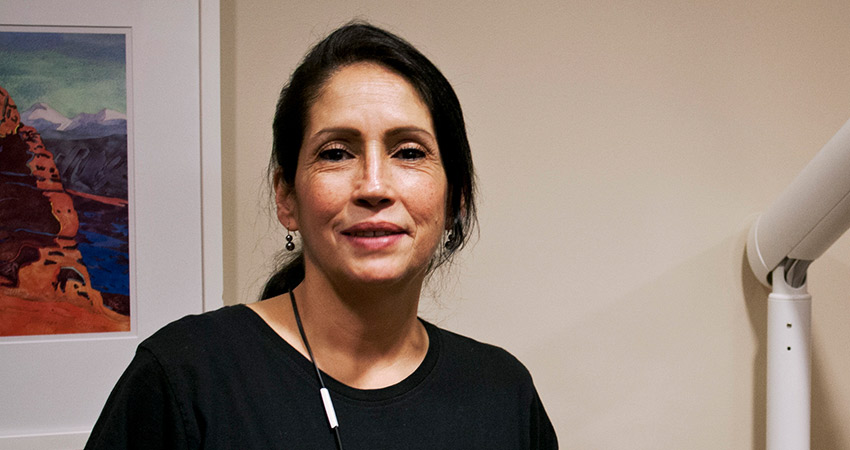 The Fourth Street Clinic gave Kim a new smile,
allowing her to rebuild her life

Kim’s expectation was that the dentist would just extract her teeth and give her dentures, but Dr. Ron Kehl saw potential and saved her teeth—building them up with composite and crowns, at no cost to her. Her new smile gave her the confidence to land a full-time job, and today, she lives in an apartment outside the city, and works full-time doing a job she loves.

Just like his work with Kim, Dr. Kehl says that a clinic like the Fourth Street Clinic runs differently than a private practice, because they don’t always know if or when they’ll get to see their patients again. Thus, they try to do as many procedures as they can in one sitting, meaning longer appointments and fewer patients. But while most people hate coming to the dentist, he sees something different with his patients. “Unfortunately, we do a lot of extractions because of years of neglect, but often, these people are HAPPY to get their teeth pulled because they’ve had years of pain and nobody that could help them!” Another anomaly? “Our patients will tell you a lot about their life because a lot of times, we’re the only friends they feel like they have when they come to see us. Some people will even fall asleep in the chair when they come for their appointments because it’s actually a place where they can rest and not have their guard up. Most homeless people sleep with one eye open. They come and let down their guard with us and tell us a lot about their lives. And it does affect you in positive and negative ways so we as staff members have to try and take care of each other and be aware of that burden and how it might affect us.” 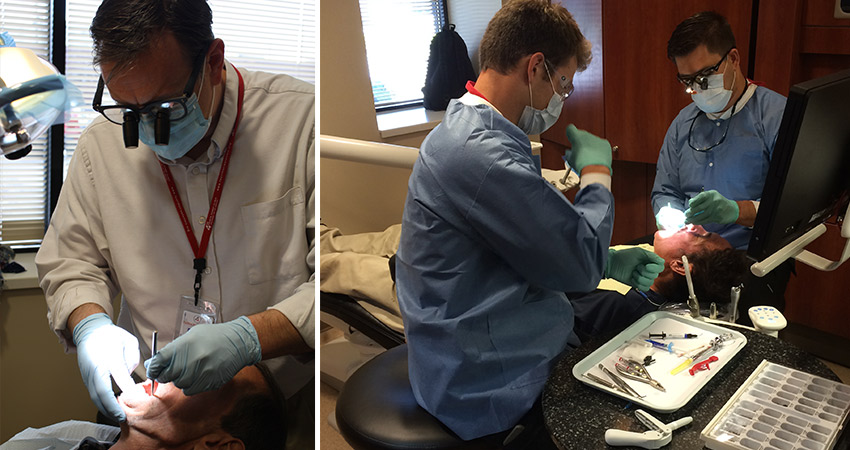 
However, Dr. Kehl said he’s seeing improvement on extractions, thanks to the help of volunteer hygienists and dental students from Roseman University Dental School, and from the dental school at the University of Utah. “They do cleanings and we try to do periodontal cleaning and fluoride treatments and teach them proper hygiene and that’s been neat. We’re seeing a trend toward fewer extractions and more preventative and restorative procedures as well as cleanings, which means they’re taking care of their teeth and coming back and starting to realize the importance of good oral health.”

More often than not, Dr. Kehl has noticed, “We’ll often see, on the dentistry side of things, that the few last steps that many people here need to take to get out of homelessness is to take care of/remedy their teeth. Usually in their situations, they’ve let their teeth go due to drug abuse or whatever it may be, and they often feel ashamed of their smiles and teeth. They also say that even though many of the people we treat have overcome their addictions, looking at themselves in the mirror reminds them of their past lives and they feel incredibly ashamed and sad and they purposely hide their smiles. So, when we change their smiles, whether through repairing their teeth or giving them new teeth, it’s life-altering for them! Their personalities change, and their behavior is different.” 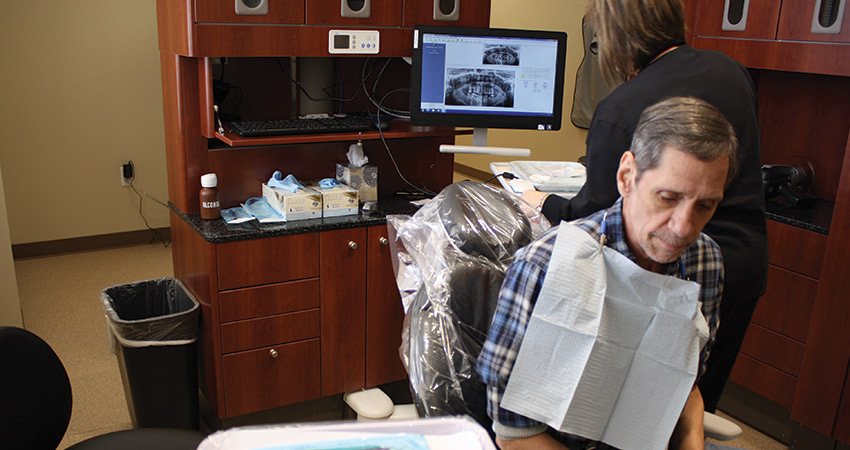 A dental patient at the Fourth Street Clinic
waits to get examined by Dr. Ron Kehl

He’s quick to add though, that the patients he treats are not the only lives that have been changed during his time at the Fourth Street Clinic. “You realize ultimately, when you break down the walls of homelessness, you see that there’s a human being in the chair that has the same emotions, the same feelings, the same wishes and hopes and desires as everyone else. They’re human beings. They’re just like everyone else. They’ve just had a really rough go—whether it’s something they’ve brought on themselves or something that was handed to them. As you work here, you stop judging people.” 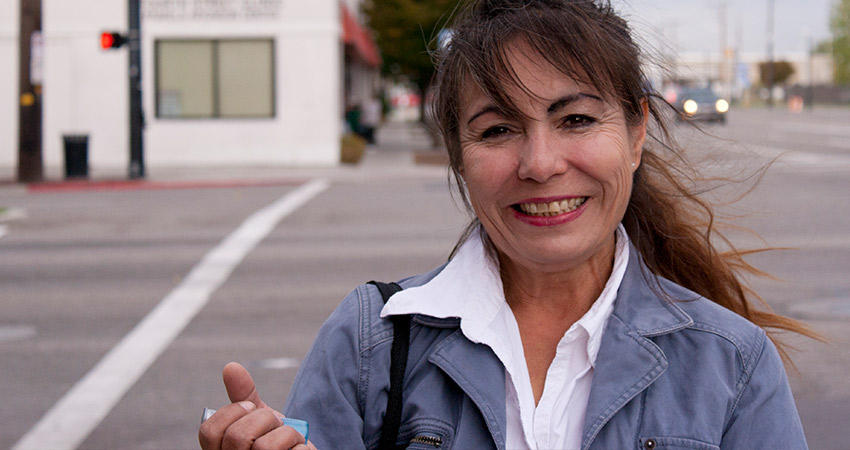 Elaine, a patient at the Fourth Street Clinic,
walks down the street with a smile after
receiving negative results on her
mammogram. “To be homeless, that was the
hardest job  I’ve ever had my entire life,” recalls
Elaine, who recently found an apartment
and is now back on her feet.
Photo courtesy James Jarrard