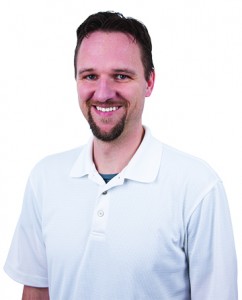 Creativity and Innovation with Peter Allred

“My favorite thing about my job is the freedom that working in Research & Development (R&D) gives me to be creative and research things. Certainly, it has to be disciplined, but it doesn’t mean I have a script for every day,” says Peter Allred, Ultradent’s Technology Director over Formulations.

Thanks to that culture of creativity and the freedom Ultradent gives its R&D team to try new things, the size and product offering of Ultradent has grown vastly since Peter first arrived. “When I started at Ultradent, I think we had 75–80 people who worked here. Now we have over a thousand! We made Opalescence® once a week—now we make four or five batches a day. Usually we’d make one or two other things, like Ultra-Etch, once a week too. We were a very small operation. There were only 10 people filling syringes and now we have automated machines to do that.” He continues, “We would go to Dr. Fischer’s house once a week or so to fill up two containers of glycerin, which is, aside from water, the most used ingredient in any of our products—and now we receive that in tanker trucks 500 gallons at a time, at several shipments a week. The scales have changed dramatically!”

Peter joined Ultradent in 1991, a year after Opalescence was introduced. Despite the brand’s immense growth over the years, he’s quick to attribute not only Opalescence’s growth, but the growth of modern teeth whitening in general largely to Dr. Fischer. “I’ve inherited a lot of the whitening family over the course of my career, but I stand on very big shoulders. Dr. Fischer is the originator of contemporary whitening as we know it—which has now gained worldwide acceptance. He is the person responsible for bringing it to the masses. Prior to sticky-viscous whitening products like Opalescence, yes, there was whitening, but it wasn’t convenient. It was liquid with horrible tray systems—and the product would run down your throat—it was just awful.”

Known for innovation, Dr. Fischer, Peter, and his team also revolutionized the way we whiten today. “10% carbamide peroxide gels were the mainstay for years. Nobody really dared to go any higher than that. 10% carbamide peroxide is equal to about 3% hydrogen peroxide, and now we’re up to 40% hydrogen peroxide with Opalescence® Boost, so it’s changed a lot (highly concentrated teeth whitening formulas like Opalescence BOOST can only be applied by a dentist and aren’t available for at-home use.) There are a lot of “firsts” on Opalescence’s timeline. We were the first company to offer flavored gels, we were the first to put additives in for improvement in sensitivity too. Some of that stuff, when we did it, was pushing the envelope.”

Peter also played a major role in the introduction of, arguably, the world’s first widely accepted in-office whitening treatment. “Even at its earliest stages, Opalescence BOOST was always red-colored ibecause of the contrast it offered to the teeth so the dentist could see the product clearly and make sure it didn’t go anywhere that they didn’t want it to.” However, shortly after the release of the original product, Peter and his team encountered some road blocks. “We were having issues with the stability of the product over time, which led us to creating the double-barreled syringe delivery system of Opalescence Boost, which separates the components of the product into two separate but connected syringes. That way, the clinician can mix and activate the product when they want, which solved the stability issue.”
He adds, “Of course, the credit for the double-barreled Opalescence Boost syringe also goes to molding R&D, who gave us this amazing system. Since Ultradent introduced it, the double-barreled syringe concept has been innovative enough that it’s now used extensively in the medical field and other industries.” 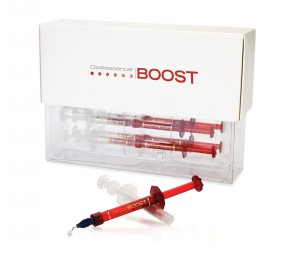 Today, Peter still loves working to create new and inventive ways to improve the dental industry, not just through teeth whitening. “Whenever a new product comes about, the chemical formula, testing, and first batches always routes through my group.”

As for the future, he says, “I see a lot of opportunity and advancement in the near future with fluoride varnishes. I’m really excited about it. If you think about it, fluoride treatments in the past 20 years usually were delivered with a big Styrofoam tray that they would put in your mouth and it was horrible and disgusting. I think the development of fluoride varnishes has had a huge impact on the industry because it’s a controlled amount of product that is given to the patient. We have a great formula with Enamelast® and it’s going to be really fun to see what the future holds with that.” 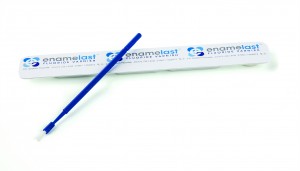 Once a congressional nominee for a coveted spot at West Point, Peter says he has no regrets about his long career with Ultradent, which has fostered his love for all things R&D. “My passion for chemistry was reinforced when I came to Ultradent because Dr. Fischer loves to dabble and play with formulas and chemicals. Yes, I always loved chemistry and math, but I originally wanted to go to school to be structural/civil engineer. After my experiences here, I changed my career path to chemistry, and the rest is history.”

When he’s not at Ultradent, Peter loves spending time with his wife of 21 years, his three children, and playing basketball with his son.