A Root Canal on a Jaguar

A career in dentistry can take you to many incredible places. Outside of the life changing work that can be done in their individual communities, dentists are often called on to travel the globe. On humanitarian missions they help those who don’t have consistent access to oral health care.

Kyle King, DDS, has experienced these life-shaping humanitarian trips throughout his blossoming career. He’s a general dentist practicing at Jordan Family Dentistry in Lufkin, Texas, and has traveled abroad multiple times to assist communities in need. Dentistry has also taken him one place he certainly never expected: the Ellen Trout Zoo.

“My town is a really small town. I know pretty much all of the veterinarians in east Texas,” King says. “I always told them, if they needed anything, to let me know.”

One day in the spring of 2022, Dr. King found out his services were needed for an animal. Only, it wasn’t a typical pet you’d expect to see at a vet.

It was a Jaguar named Seraphina. “Most of the social media stuff you see [in regards to animal dentistry], is police service dogs or, you know, something a little bit… smaller… a little bit more tame.”

Seraphina hadn’t been eating well and was losing weight as a result. A dental exam showed a broken upper canine and an abscess. “They sent me X-rays of the tooth, videos and pictures… and it’s HUGE [ . . . ] On humans, most peoples’ teeth go to about 30 millimeters. So most of the instruments we have are geared for about three centimeters. Had this tooth not been broken, it was just about six centimeters long.” 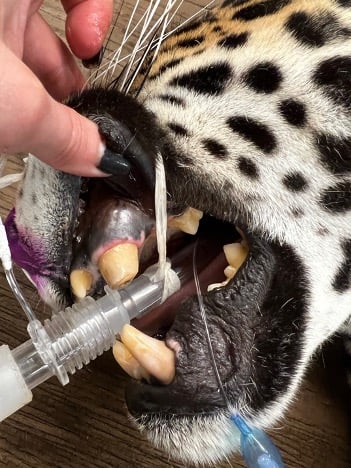 Dr. King consulted with his local endodontist, who fortunately had done root canals on animals during his residency. “He was really instrumental in helping me do all this,” King says.

After the cat had been on antibiotics for a few weeks to help with the infection in the tooth, Dr. King and the rest of the team arrived at the zoo to perform the root canal. “It was honestly a surreal experience,” he says. Upon arrival, the cat was tranquilized with a dart and brought into the procedure room. “My first question was like, you know, how long is this thing out for? How long is this tranquilizer going to last? And they said ‘well it kinda depends.’ And I’m just like, that’s not a question you want to get an ‘it depends’ answer to.”

“We also had to have security there. In the event it did wake up, we had to knock it back out. So there was a guy with another tranquilizer gun right there, beside us, just on-guard. I was never expecting a security detail while overseeing a root canal procedure. That was definitely a curveball for me,” King says with a chuckle and a shrug. Dangers aside, the team pressed forward. Where they initially thought the procedure might take twenty minutes, the entire process took nearly an hour and a half. “Because we were [at the zoo and not in a dental office] we had to clean out this infection all by hand. And it ended up being 52 millimeters long. So most standard retail [equipment] goes to 27 to 30 millimeters. And we had to do it all by hand. Most of the time when you’re in a dental office, you have a drill, you have a rotary, you can do it pretty quick. But whenever you’re trying to scrape out a tooth that’s twice the size all by hand, it takes a little longer than we had anticipated…to say the least.”

The size of the tooth created another situation the team had to work around. “Because that tooth is so big, it goes all the way to the sinus cavity. So it's not like whenever you take X-rays in your dental office where it's an immediate kind of thing. [When working on a big cat] it’s this huge plate that's this big,” King says, gesturing a square much larger than his head. “They have to put [the plate] behind the head to be able to take a single X-ray to see. So for a lot of it, we had to go by feel.” 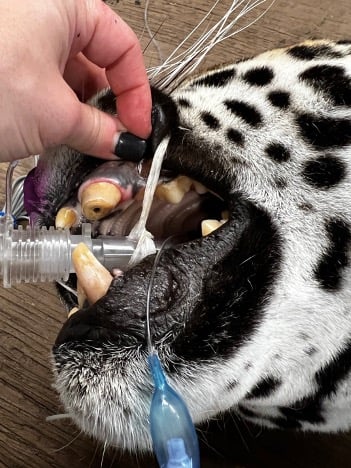 The shape of the tooth also brought about unique issues for the team. “On a canine tooth in humans, it’s fairly straight. But because of how [a jaguar’s] jaw is, it does a full hook,” King says, motioning an arch shape to show the curvature of Seraphina’s canine. “And that tooth was really infected. No wonder that poor cat was not eating well. There was a lot of stuff in that tooth.”

“We had to use some sealer and some melted gutta percha stuff to be able to fill in that canal, just because of how the morphology on it was—it was just such a steep hook. There was a little bit of improv there, ya know, this is not in the standard textbook,” King says with a wide grin.

Seraphina is reportedly doing well since the procedure. As for Dr. King, there’s a good chance this won’t be the last time he finds himself working on the mouth of a big cat—he’s heard there’s a nearby tiger in need of a root canal as well.

Ultradent provided product—including MTApex™ bioceramic root canal sealer—for this procedure and proudly donates to humanitarian efforts around the world. If you have an opportunity you would like to be considered for sponsorship, email press@ultradent.com.